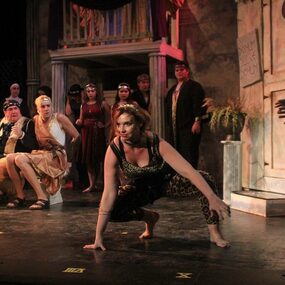 Katie Gall starting singing before she could even speak.  Hailing from New Hampshire, she started performing as early as kindergarten and has continued ever since in a wide variety of genres.

Katie received her Bachelor's degree as well as her Master's from the Steinhardt School at New York University in Vocal Performance as well as a post-Master’s degree in Vocal Pedagogy.  Katie taught at NYU as well as a group and private voice teacher off and on from 2009 until 2016.

While in New York City, Katie founded Collaborative Artists Studios with fellow teachers Joshua Bailey and Michael Hadary, as well as taught at a variety of schools around the NYC area while maintaining her own private studio.  She performed with many opera companies in the area, in numerous concerts, as well as recorded with Grammy nominees and winners.

Recently, she has moved back to the New Hampshire seacoast area to settle down with her family, perform more locally, and focus on her growing business as a Health, Wellness, and Empowerment Coach.